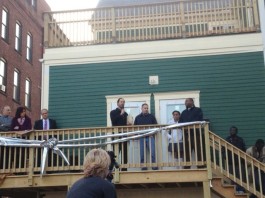 Stone Soup Community Center celebrated the near completion of their Green Rebuild and Collaborative Training Project with a ribbon cutting on Tuesday, December 3, 2013. Rob Crowner spoke on behalf of Equity Trust.

Stone Soup is a coalition of community groups, grassroots activists, and artists who came together in 2006 to serve a disadvantaged neighborhood in central Massachusetts through a variety of projects and activities – most notably the establishment of a community center that functions as a neighborhood anchor and safe haven for children and adults.

As general contractor Stone Soup chose Youth Build Boston, a nonprofit that provides jobs and training in the building trades to young adults, and the local carpenters’ union provided substantial in-kind goods and services. Together, all partners participated in creating a long-lasting, energy efficient, and economically sustainable community-owned building.  An Equity Trust loan in 2013 provided the final piece of financing needed to complete the project.