Supporting a start-up in Saratoga County 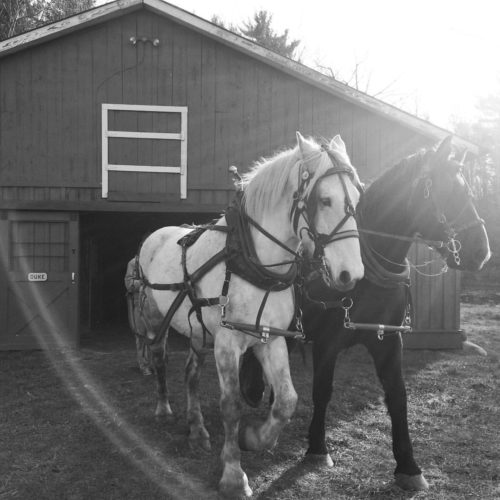 In 2016, Tim Biello launched Featherbed Lane Farm, a unique horse-powered, year-round community supported agriculture enterprise with a mission to provide the Saratoga Springs community with year-round access to the highest quality food and meaningful on-farm experiences. Through this diversified, draft-powered farm business (including a free-choice vegetable CSA and pastured eggs), Tim hopes to earn a healthy and satisfying living, farm and manage the land sustainably, and provide farm fresh food and on-farm public programs to engage and benefit the community.

Tim began farming in 2006 and had five years of farm management experience, focused on vegetable production, egg production, and draft horse systems. He purchased and trained his first team of horses in 2010, but then spent four years facing a challenge common for beginning farmers today: access to affordable land.

During his search for farmland in the Saratoga Springs region, Tim connected with Equity Trust’s Hudson Valley Farm Affordability Program as well as with the Local Farms Fund (LFF). When Tim found the right property for his future farm operation, a 62-acre farm in Ballston Spa complete with a house and barns, LFF acquired the farm on Tim’s behalf, as he was not able to purchase it on his own. LFF purchased the property in 2015 and leased it to Tim until they were able to transfer the farm to farmer ownership in 2020.

Tim worked with Equity Trust and Saratoga PLAN, a land trust operating in Saratoga County, to protect the farm permanently and make it more affordable, both for him when he purchased it from LFF, and for future farmers. In May 2016, Saratoga PLAN was awarded funding for an easement through a New York State Hudson Valley Agricultural Enhancement Program grant, with Saratoga County providing matching funds. When the project finally closed in January 2019, Equity Trust’s Hudson Valley Farm Affordability Program simultaneously purchased a permanent affordability restriction, which is included in the conservation easement held by Saratoga PLAN. These protections lowered Tim’s lease fees, and the option price when he was ready to buy the farm. This was our first farm protection project in Saratoga County.

Tim works with American Farmland Trust, as New York Project Manager and Hudson Valley Farmlink Network Coordinator, which helped him save money to make it possible for him to purchase the farm. He was able to get on the land and start farming ahead of the easement funding coming in thanks to LFF’s investment, and he launched his new farm business on a property that he was able to afford thanks to the easement and the affordability restriction. The grant from Equity Trust will ensure the farm’s long-term affordability and active use for commercial agriculture.