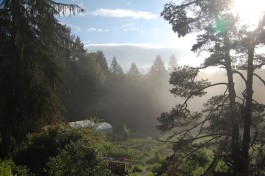 A new loan made in 2015 not only enables an evolution in a property ownership arrangement originally designed in part by Equity Trust, but also represents an innovation in our lending practice that could become a model for future projects. With the participation of project supporters recruited by the borrowers, Tryon Life Community Farm and the Cedar Moon collective, we were able to refinance a conventional loan that otherwise would have been beyond our capacity, and at an interest rate lower than we are typically able to offer. As a result, the borrowers were able to fully realize the “wild law” land stewardship vision they had conceived ten years previously but were prevented from implementing under the terms of their original bank loan.

In 2006, the Equity Trust Fund made a loan to enable the purchase and preservation of a seven-acre urban farm in Portland, Oregon under a structure in which several government agencies received a conservation easement and a local land trust, Oregon Sustainable Agriculture Land Trust (OSALT), acquired title to the land and entered into a long-term ground lease with a nonprofit community farm, Tryon Life Community (TLC) Farm, which also acquired ownership of the improvements on the land. The farm features bees, chickens, goats, and fruit trees as well as permaculture gardens. A worker collective, Cedar Moon, resides on the farm and operates several cottage industries.

At the time of the original loan, the collective had been renting the land and offering experiential education workshops and internships on agriculture and sustainability. When a developer acquired an option to purchase the land to build a residential subdivision, TLC Farm was created through the efforts of friends and neighbors of the adjacent state forest “to permanently protect this place and transform it into a public resource.”

With the assistance of Equity Trust, the borrowers developed a land tenure structure that reflects a vision of “overlapping organizational rights and responsibilities for the land, in much the way an ecosystem overlaps niches” as articulated in the group’s white paper Wild Property Law, which calls for the “land-as-such” to participate in its own management (through a third-party advocate).

During the term of the original loan, TLC Farm owned the leasehold from OSALT while Cedar Moon farmed the land and carried out much of TLC Farm’s charitable mission. Now that the bank is out of the picture, Cedar Moon will purchase the residential buildings they occupy from TLC Farm while TLC Farm retains ownership of the other farm and community structures. Both will pay a ground lease fee to OSALT as tenants-in-common. The two organizations have slightly different relationships with the land and serve as checks-and-balances on each other to reassure stewardship agencies and the public that changes in organizational leadership will not imperil the land. In situations where the interests of the two organizations diverge, the long-term health of the land itself will prevail as represented by OSALT or another impartial but informed advocate.

The borrowers wanted to completely replace the bank financing with a loan from Equity Trust so that they would finally be able to own the infrastructure and share the leasehold as tenants-in-common according to their original vision. In order to make that possible, almost two dozen friends, family, and supporters of the borrowers agreed to share in the risks and benefits of the loan along with Equity Trust, providing more than forty percent of the funding through individual “participation loans” that Equity Trust will administer.

Participants set their own terms with regard to interest rate and repayment schedule, and many were quite generous and flexible in their expectations. The interest rates were blended proportionately, resulting in a much better overall rate than was available in the market and which will actually decline over time as the relatively higher-interest share of the loan is paid down more quickly than the lower-interest share. Meanwhile, the borrowers have just a single monthly loan payment to make, since all of the participation loans were bundled into the Equity Trust Fund loan.

This weaving together of a network of small lenders leveraged a larger Equity Trust loan, deepened and extended community investment in the project, and allowed the borrowers to funnel more resources directly to their educational and sustainability programs. Moreover they note, “…our interest goes directly to people and projects with values directly aligned with our own.” Equity Trust is very excited to be a part of this project and looks forward to using what we learned in similar projects in the future.