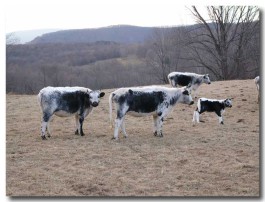 Artemis Farm, in New Lebanon, a rural community located in the northeast corner of Columbia County, New York, is home to Cynthia Creech’s Randall cattle and her genetic preservation work to restore this hardy, historic breed. Randalls are a rare breed of purebred cattle developed in southern Vermont in the early 1900s, descended from the indigenous landrace cattle common in nineteenth century New England. Randalls have qualities suitable for dairy, meat, and draft uses.

Since 2011, Cynthia has operated Artemis Farm on 120 acres, though she owned only a 62-acre parcel. When she wanted to purchase the adjacent 57-acre parcel, which she had been renting, she decided to do so in conjunction with the sale of an easement that would make the land permanently affordable. The project, part of Equity Trust’s Hudson Valley Farm Affordability Program, assisted Cynthia in the purchase of the land she’d been renting, and permanently protected all 120 acres as a working farm. The project was made possible through a partnership with Scenic Hudson and Columbia Land Conservancy (CLC).

Equity Trust’s role was two-fold: First, in May 2015, the Farm Affordability Fund bought the 57-acre parcel to secure the land, and provided a secure lease to Cynthia while Scenic Hudson and CLC assemble funds to purchase an easement on all 120 acres. Later, when conservation funds were secured from state and federal programs and Scenic Hudson, the Farm Affordability Program contributed a complementary grant to acquire additional restrictions that will keep the farm affordable. In June 2018, Cynthia purchased the property and simultaneously sold an easement including affordability restrictions, held by CLC. With the land secured, Cynthia’s cattle have a safe home and her remarkable work can continue.

The Randall Cattle had nearly disappeared, with just fifteen living under poor conditions when Cynthia purchased them in 1987. Since then, Cynthia and a few other farmers worked to rescue the breed, bringing the number of Randalls back into the hundreds. Cynthia has sold breeding stock as well as oxen to a number of other farms that want to establish Randall herds or use Randalls as working animals. She has started over twenty herds of Randalls from her original herd.

As with other critically rare livestock breeds, when Cynthia sells her cattle, there is an implied expectation of stewardship associated with ownership. Cynthia has worked to identify buyers who want to be part of the Randall recovery and conservation effort. Cynthia received national recognition for her conservation work in 2000, when the American Livestock Breeds Conservancy awarded her its annual conservation award. In 2001, together with farmers Phil and Dianne Lang, Cynthia started the Randall Cattle Registry. With the population now stable, Randalls are once again being used commercially. Cynthia also sells meat as part of The Lebanon Valley Cooperative Meat CSA. She raises her animals using organic methods; they are grass fed and are not given grain, antibiotics, chemicals or commercially processed supplements.

While waiting for the easement to be funded, Cynthia received a loan from the Equity Trust Fund to help manage cash flow.